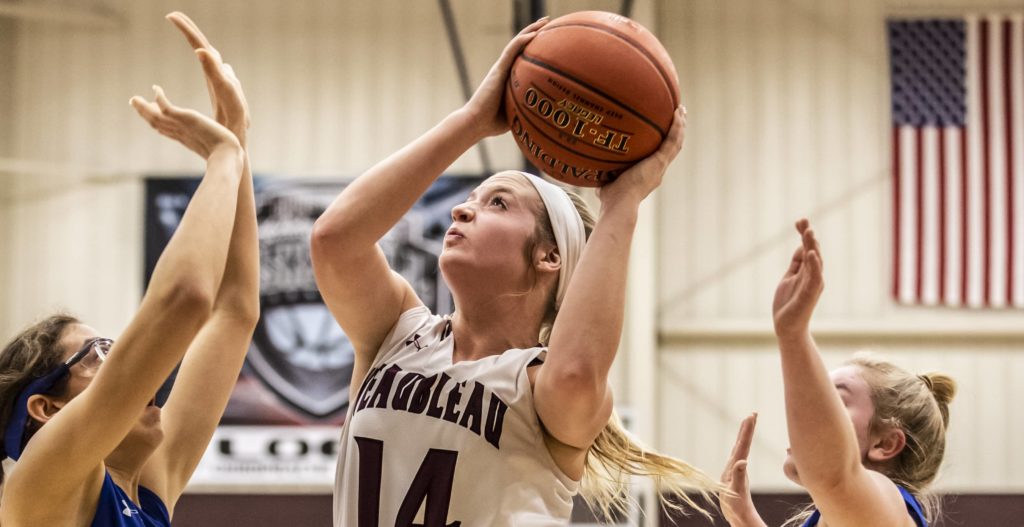 Jenna Dagget led Weaubleau on the softball field, and she will also look to lead the Tigers on the basketball court. She earned second-team all-conference honors playing on last year’s 17-win team. She finished third on the team in scoring at 13.2 points per game.

“She is a determined athlete who can pretty much do most things she sets her mind to doing. She is great at scoring off the dribble. She finds ways to get to the rim,” Dryer said. “We are going to need leadership for sure. She is going to have to put points on the board for us and get comfortable with the ball in her hands. We will also need her to play bigger roles defensively and rebounding.”

Seniors Haleigh Dryer, Celena Lambeth and Julia Dennis along with juniors Katie Ginnings and Grayce Hostettler will also be leaders for the team.

Coach Dryer on Haleigh Dryer: “Haleigh was honorable mention all-conference last year. She hit 33 three pointers a year ago. She will be relied upon to spread the defenses again this year for us. She is a player that isn’t flashy and don’t stand out a lot but she plays the game without making many mistakes or hurting the team. She knows her limits and normally plays smart and consistent. When she is hitting shots she is as smooth as anyone.”
Coach Dryer on Celena Lambeth: “She will start the year at point guard for us. She is a strong player. She can play defense. She can also hit the three point shot. She is another one that can hit a bunch of them when she is hitting. She will have to be more of a leader this year as she runs the team from the point
Coach Dryer on Julia Dennis: “Julia is another player that don’t make many mistakes. She is one of our top defenders maybe our top defender. She has spent a lot of time developing an outside shot. She has become extremely consistent midrange and still shoots a high percentage as she extends out.”
Coach Dryer on Katie Ginnings: “Katie has gotten stronger and has gained more athleticism. She has a good knowledge of the game and has some moves on the interior to match. She can also handle the ball some and is developing an outside shot. I expect her to be matchup issue for opposing teams most nights.”
Coach Dryer on Grayce Hostettler: “Grayce is a very, very strong girl. She is a really good rebounder. She defends the post well and has become a solid scorer in the paint. She is hard to handle with her size and strength. I expect her to have a breakout season.”

Other returning players include the junior trio of Jadyn Lower, Emma Case and Brynn Mitchell.

Coach Dryer on Jadyn Lower: “Jadyn can play multiple positions. She is an accurate outside shooter. She is another strong player. She will see several minutes this year and I expect her to make all of those minutes quality minutes.”
Coach Dryer on Emma Case: “Emma may be our best shooter. She is a player who will do anything that is asked of her. She is a very hard worker. She is also capable of putting in extended minutes and be successful in doing so.”
Coach Dryer on Brynn Mitchell: “Brynn works very hard. She is a very good defender. She continues to work hard offensively to where she is becoming a respectable ball handler and developing an outside shot. Her intensity is great to have.”

Coach Dryer on Sutton Mitchell: “She is the only true point guard on the team. Right now I expect her to spend a lot of time at the point position. I’m curious to see how well she processes the game and runs the team from the point position when she is in the game. She has worked hard to become a solid defender and she has become a consistent three-point shooter.”
Coach Dryer on Jaylee Daggett: “I expect at some point in her career whether it is this year or in the near future one day she will just instantly dominate the game. She is growing and has great size with athleticism to match. She is a good passer, can find ways to score, a good rebounder, and she can handle the ball especially in transition. She does some very good things – she will do some huge things once the confidence is picks up to reach her ability.”
Coach Dryer on Tayler Ashlock: “Tayler is another athletic girl. She is a very aggressive player who can really guard on the defensive end. She is developing her shot and impressing me each day she is in the gym. The neat thing is she continues to impress herself – she too will need to gain more confidence.”
Coach Dryer on Jalynn Rogers: “Jalynn is just an all-around solid player in the post. She works for positioning and is strong enough to make things happen. She is spending some time right now developing some moves where she can transition into the high school game and dominate such as she did in junior high. She will provide depth in the post, and I expect some nights she will lead us by her post production.”

Weaubleau will look to use size and depth to its advantage.

“We have size and can score in the post, so we hope to be able to still pressure defensively and run the floor in transition for easy buckets then when we need to slow down we can pound the ball into the post. We have 13 girls on the roster and they can all contribute,” Dryer said.

Weaubleau opens the season on Nov. 20 at Macks Creek.

“If we can handle the ball and get consistent outside shooting we could be a dominant team. If we don’t, we will be pretty average,” Dryer said. “I like how we have looked in both of those areas to this point. I am anxious to see what it looks like in game mode.”