For Alabama Basketball To Win SEC Title, It Must… 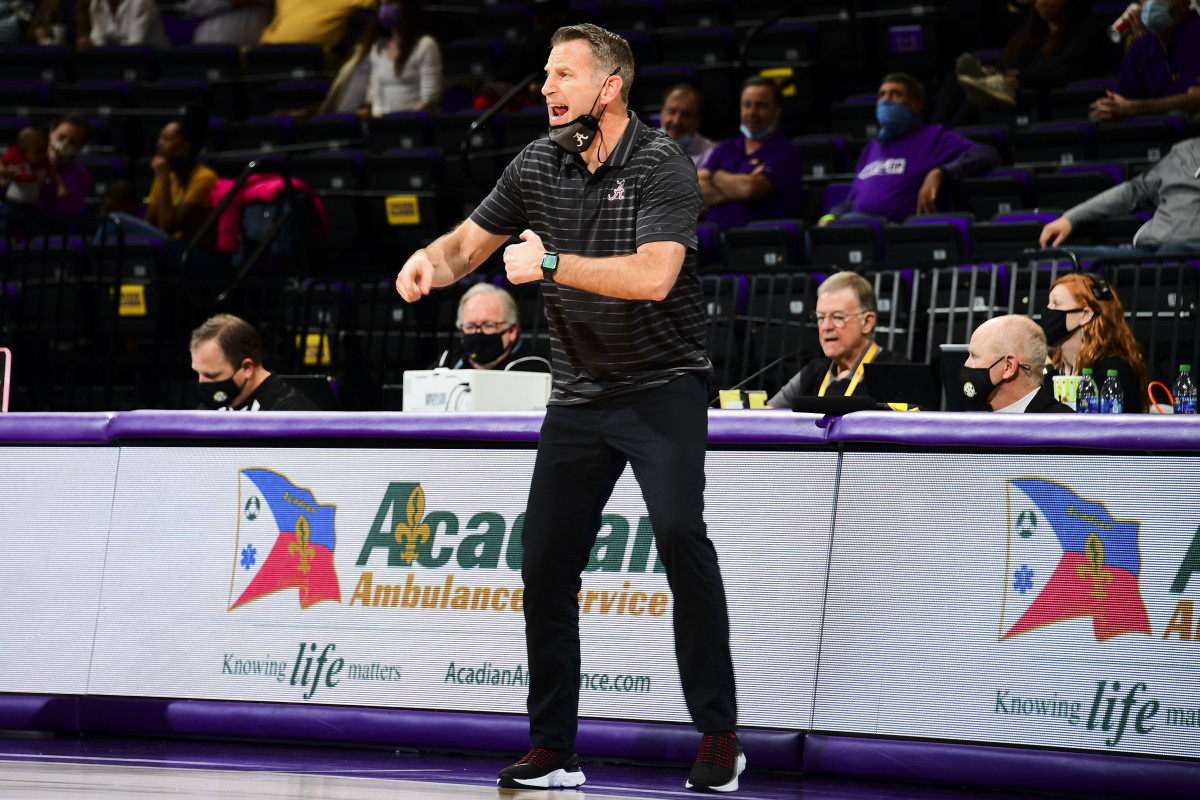 As the month of January comes to a close, the University of Alabama men’s basketball team is trying to avoid familiar territory.

Over the last 40 or so days, the 9th-ranked Crimson Tide won 10 straight games, including nine against SEC opponents, before dropping a close road contest to No. 24 Oklahoma on Saturday, 66-61.

Alabama heads into February with a vice grip on first place in the conference standings with no other team within three games with nine left to play.

The bad news is the Crimson Tide heads into the second-to-last month of the season having sputtered on offense over the last three times out and is banged up all around.

Forward Jordan Bruner, who tore his meniscus back on Jan. 12, is expected to return sometime in the middle of February as Alabama hits the home stretch toward the NCAA tournament.

At 14-4 overall, it has been an already historic season for the Crimson Tide, breaking multi-year losing streaks at Kentucky, at Auburn, and versus Florida in Tuscaloosa.

Its current nine-game streak in the SEC is the longest for the program in over six decades.

But for Alabama to finish the job and win its first SEC title since 2002, it will have to overcome its recent February skids.

Now in all four instances, Alabama was a bubble team for the Big Dance.

This year, of course, it’s very different given that the Crimson Tide is firmly in the NCAA tournament and was projected, most recently, as a two seed by ESPN bracketologist Joe Lunardi before the loss to the Sooners.

Alabama coach Nate Oats is hoping that its most recent defeat doesn’t tailspin into more and more.

“It was definitely somber,” Oats said of the feel in the locker room on Saturday. “I think our guys understand that we didn’t come out ready to play. We have been warning them. This is the third game in a row we haven’t played well. We squeaked by Mississippi State then had to come back in the last four minutes against Kentucky. That’s three games in a row we haven’t played well.

“I hope our guys are mature enough to understand that if we keep doing this its going to go down. We have put ourselves in a great spot to win the league. Had a great first half of the SEC schedule. But we gotta get it fixed. Gotta get it righted. Better effort. Better focus. The entire coaching staff has to do a better job. Guys are disappointed but its not the end of the world.”

Oats is right, it isn’t, but the next two games for the Crimson Tide are, arguably, its two biggest tests remaining on the schedule with LSU at home on Wednesday (6 p.m, ESPN2) then on the road at No. 12 Missouri on Saturday (11 a.m, ESPN).

If Alabama can get by those two teams unblemished, then SEC schedule is certainly more favorable. Six of its seven remaining games all come against teams in the bottom half of the standings with the exception of Arkansas.

More than ever before in recent years, this Crimson Tide team is capable enough to put its February nightmares to bed.

Oats and company are still sixth in the nation in defensive efficiency and 21st in offensive efficiency per KenPom. It has senior leaders like Herb Jones, John Petty Jr., and Alex Reese, who have have seen it all throughout their time in Tuscaloosa.

It also has now been hit in the mouth by a top-25 team, gaining the adversity it needs to make another run over the second half of the conference schedule.

“One of our seniors made a good point,” Oats said. “Oklahoma hit us in the face and went up by 12 in the second half then we responded with a run to get the lead back. Now we have been punched in the face for a full game.

“Can we respond with a run that looks like the run that gave us the lead? Can we get back to the point where our games look like that, for a full 40 minutes? If we have that mentality, then we’ll be alright.”