Maryland basketball vs No. 5 Iowa preview: Everything to know – Testudo Times

Maryland basketball vs No. 5 Iowa preview: Everything to… 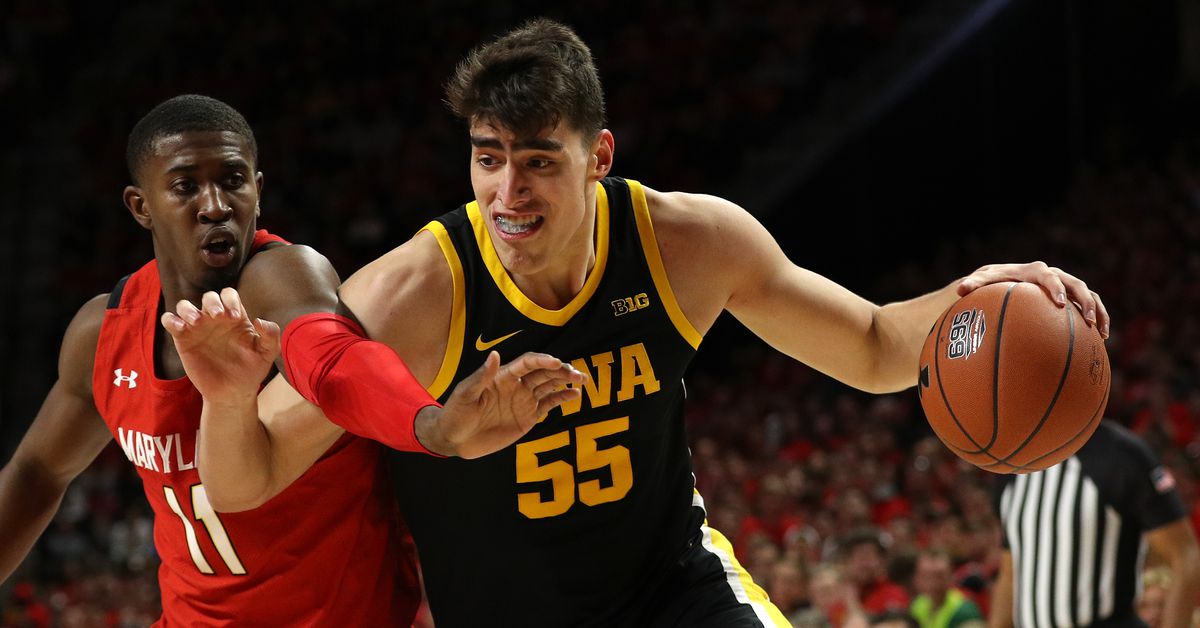 The Luka Garza show is coming to College Park.

Maryland men’s basketball faces a steep task in its matchup with No. 5 Iowa, led by the Big Ten Player of the Year and 2020 National Player of the Year (per Sporting News, Stadium, Bleacher Report, FOX and ESPN), Thursday night at Xfinity Center.

The Terps (6-5) have struggled to start Big Ten play, to say the least. As of Wednesday evening, they sit at 12th place in the conference standings with a 1-4 record. Head coach Mark Turgeon’s squad has lost its last two contests, suffering double-digit defeats at the hands of then-No. 16 Michigan and Indiana.

“Everybody is gonna have these opinions on our bigs and us, and as long as we stay together as a family and know what we got to do, it’s just us,” Donta Scott said after practice Wednesday.

Darryl Morsell suffered a facial bone fracture against the Wolverines, forcing him to sit out for the matchup with the Hoosiers. Turgeon said the senior will be back in action, mask and all, against Iowa, which provides a big boost to the team.

“I was really surprised, but I was super happy because he’s a huge part of our team,” Aaron Wiggins said. “And we need his energy, we need his playmaking abilities and everything he brings to the game.”

Head coach Fran McCaffery became the leader of the Hawkeye program in 2010 following head coaching stints at Siena (2005-10) and UNC Greensboro (1995-2005). He’s had an accomplished career from the start, taking over the Lehigh Hawks in 1985 as the the youngest head coach in the nation at age 26, just three years after his first assistant coaching gig. McCaffery has led Iowa to a postseason tournament in seven of the last eight complete seasons, including four NCAA Tournament bids.

Iowa came into the 2020-21 season with high expectations, and it’s lived up to the hype, establishing itself as one of the best teams in the country. The Hawkeyes two losses came to ranked programs; they fell to No. 1 Gonzaga — the clear top dog in college basketball — in early December and were upset in an overtime loss to Minnesota (now ranked No. 16) on Christmas Day.

Luka Garza, senior center, 6-foot-11, 265 lbs., No. 55 — This one goes without saying, right? The 2020 National Player of the Year shocked many when elected to stay in college instead of declaring for the NBA, and his decision has paid dividends for the Hawkeyes.

The Washington, D.C., native, has averaged 27.5 points per game, which ranks second in the nation and first in the conference, along with 9.1 rebounds and 2.0 blocks so far this season. He’s also shooting 62.4% on field goal attempts and 48.7% on three-pointers. Additionally, Garza ranks first in the nation with 302 points through 11 games.

Joe Weiskamp, junior wing, 6-foot-6, 212 lbs., No. 10 — As the clear No. 2 guy on the team, Weiskamp is the Robin to Garza’s Batman. He’s averaging 14.6 points and 6.7 rebounds per game, both of which rank second on the team. Outside of Garza, he’s the only player with more than 100 shot attempts this season, and he’s made the most of those opportunities with a 46.1% mark on field goal attempts, including 38.8% from deep.

Jordan Bohannon, redshirt senior guard, 6-foot-1, 175 lbs., No. 3 — Bohannon entered the season already as the program record holder in career made three-pointers, from which he’s only built upon in 2020-21. In addition to averaging 9.0 points 3.1 rebounds and a team high 4.4 assists per game, the redshirt senior leads the team with 26 triples.

Though he has struggled with accuracy at times, currently shooting 37.8% on field goal attempts and 34.7% on three-pointers, he is key leader for this team. And he’s performed at a very high level over the last two games, during which he’s gone 37-for-69 (53.6%) from the floor and 12-for-18 (66.7%) from beyond the arc. It will be key for Maryland to stop this hot streak.

Offensive efficiency. One of the biggest factors in Iowa’s success this season is the team’s sheer ability to dominate on offense. With the combination of Garza and the multitude of lethal shooters, the Hawkeyes can score at will. Iowa averages 92.7 points per game, which ranks first in the Big Ten and fifth in the country. The teams also ranks first in adjusted offensive efficiency, per KenPom.

Perhaps most importantly, the Hawkeyes know how to play unselfishly, making sure they are always looking for the best shot. They rank first in the nation with 228 total assists through 11 games. But even when shots don’t go in, though, Iowa finds a way to get it done as McCaffery’s squad averages a Big Ten best 14.1 offensive rebounds per game. Additionally, the team excels at controlling the ball. The Hawkeyes lead the conference in turnover margin and are fifth in the country in turnover percentage on offense.

“We’re gonna have to be at the top of our game defensively tomorrow, but they’re gonna score,” Turgeon said Wednesday. “They’re a terrific team. It’s just whether we’re gonna be able to score enough to hang around and make it a game late, which is what we’ve been doing. We’ve been in every game, we’ve had leads in the second half. My guys are playing their their butts off for me.”

Defense. For everything Iowa does well, it can sometimes lack on the defensive end. The Hawkeyes allow 74.0 points per game, which ranks second to last in the Big Ten. This is much in part to Iowa’s struggles to defend the deep ball. The team has allowed opponents to shoot an 35.6% from beyond the arc this season, which also comes in at 13th place in the conference.

1. Will Maryland be able to keep it competitive? Though anything can happen on any given night, especially in the Big Ten, Iowa comes in with the clear advantage in this one. Following numerous games this season, Turgeon and players have remarked that they didn’t compete with enough toughness; that will need to change if they want a shot against the Hawkeyes.

How does the Terps respond when they face a deficit? Do they get down on themselves and make poor decisions, or do they keep calm and continue to fight? Iowa boasts an average margin of victory of 18.7 points, which ranks first in the Big Ten. Even if Maryland doesn’t end up in the win column, it would be a positive sign to see the team shorten that gap.

2. Who wins the battle behind the arc? Maryland couldn’t get much going offensively against the Hoosiers, especially from long range. The Terps made just seven of their 25 three-point attempts, good for 28%, in that Monday night matchup.

With the dominant presence of Garza and a clear height disadvantage all around, scoring inside against Iowa will certainly be tough, so it’s crucial for Turgeon’s squad to have more success from deep. The Hawkeyes present a prime opportunity to do so, given how they’ve defended shots from behind the arc so far this season.

But on the other end, stopping Iowa from deep will be a much tougher feat for the Terps. The Hawkeyes rank first in the Big Ten and 16th nationally with 10.4 three-pointers per game, and their 114 triples on the season also lead the conference. Maryland had success defending the perimeter last time out, holding Indiana to 18.2% shooting, which it will look to build off of Thursday night.

3. How does Mark Turgeon try to slow down Luka Garza? With a lack of height and talent down low, Maryland has struggled to contain big men over its last two games, allowing Hunter Dickinson and Trayce Jackson-Davis to have their way inside, and Garza is simply a different beast.

Turgeon and his players know the challenge that lies ahead in defending such a dynamic player, but that doesn’t make it any easier to plan around.

Opponents have doubled Garza all season, but it’s often been to no prevail. He’s consistently found ways to maneuver around for the score, or, on the rare occasion he can’t, he’s used the double-team to his advantage to find an open man beyond the arc. Northwestern managed to limit Garza to 18 points in a Dec. 29 matchup, but it came at a high cost; Iowa made 11 triples at a 42.3% clip and the Wildcats lost.

“You can throw everything at him, but he’s still gonna find ways to score, to make plays for his team,” Wiggins said. “We have to make sure that we try to contain him as much as possible, but he still has four great players surrounding him on the court. So we got to be aware of every player on the court and just key in on those things.”