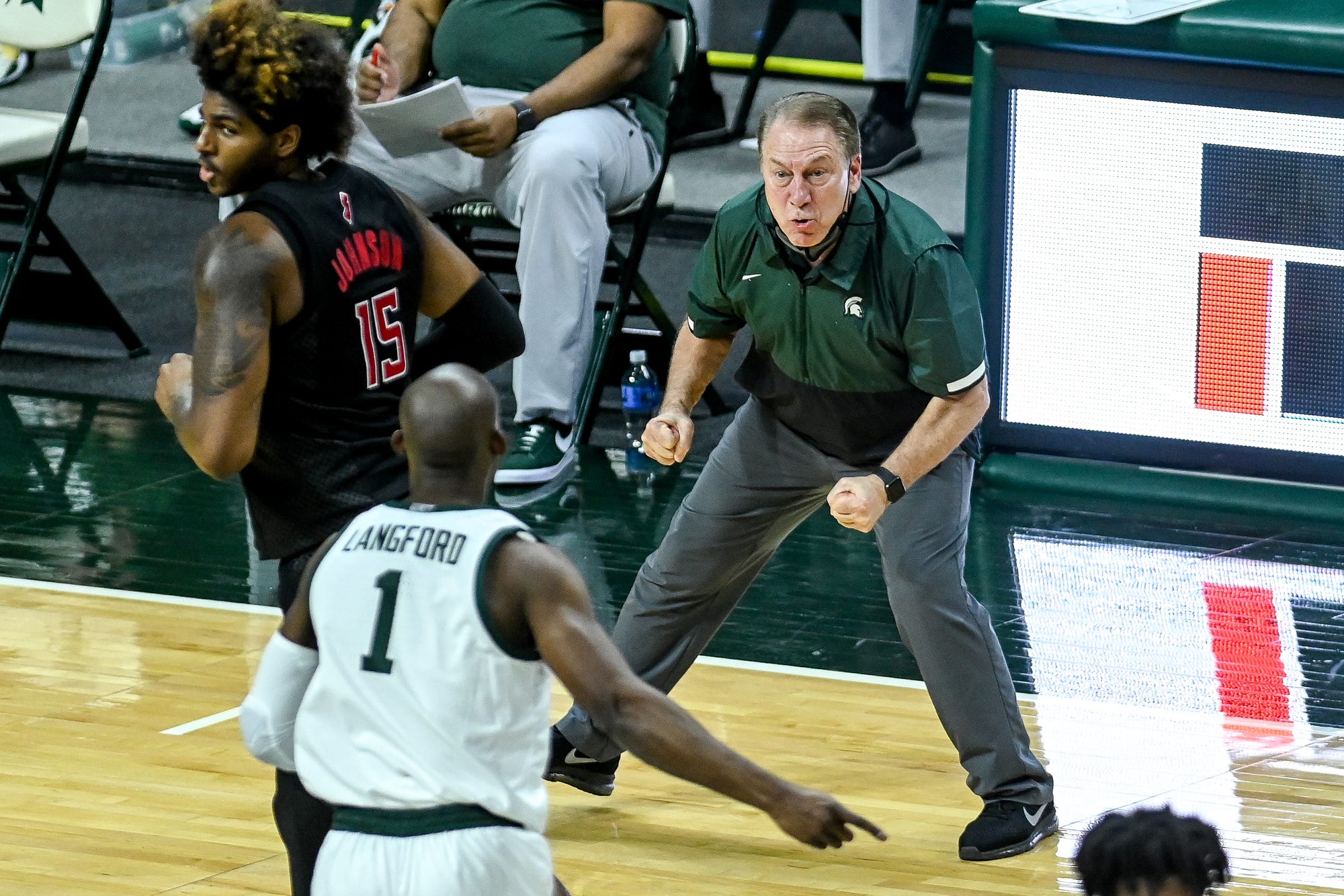 Tom Izzo: Spartans ‘got back to playing Michigan State basketball’

Tom Izzo said he wasn’t just proud Michigan State basketball beat No. 14 Rutgers but more with how the Spartans did it with defense and rebounding.

Most of the accoutrements were placed to simulate fans who can’t be there, from pictures of the coaches of the Spartans’ other sports on seats courtside to vinyl banners of the Izzone on the closed-up bleachers.

The recent additions, though, represented something bigger.

There were the Flintstones, at least cardboard cutouts of Mateen Cleaves, Morris Peterson, Antonio Smith and Charlie Bell. They filled chair-back green seats along with pictures of other former Izzo players and all-time greats, who hovered above the MSU bench as a reminder of the bedrock tenets of the program’s success.

The Spirit of Section 109 overtook his current Spartans on Tuesday night, and they responded in a way that made Izzo proud.

With a return to rebounding.

With a return to running.

Most of all, with a return to defense.

MSU smothered No. 14 Rutgers all night in a physical dogfight, got another starring performance from Aaron Henry and enjoyed plenty of complementary work at both ends from players trying to live up to the reputation established before many were born. The Spartans never trailed in their 68-45 victory and slowly started to resemble the team from before Big Ten play started.

And, in turn, received perhaps the highest compliment their coach could give them.

Was it perfect? Not at all, the 14 first-half turnovers remain a trouble spot Izzo knows his team needs to fix. The Spartans (8-3, 2-3 Big Ten) also still need more from Joey Hauser and Rocket Watts, whose second half efforts added more optimism with Purdue scheduled to visit Friday (7 p.m./FS1).

FAILURE TO LAUNCH: MSU’s biggest concern: How to get Rocket Watts to take off

Yet it was the tenacity of MSU’s defense against Rutgers perimeter players that changed from the past few weeks of struggles. The Scarlet Knights (7-3, 3-3) shot just 30.5% shooting overall and 3 of 12 from 3-point range in barely getting half of the 80 points a game they averaged entering Tuesday.

“The way we did it, I felt like we defended and kind of got back to some ways that are our standards here at Michigan State in terms of defense,” said Henry, who scored 20 points with eight rebounds, four blocks and two steals. “But we still have a long way to go. We’re not complacent, we’re not satisfied.

“Rutgers is a great team. And to be able to play defense like that, I feel like it takes a certain level of awareness and locked-in-edness, I guess you could say. We had good focus this week, and it means a lot to our team.”

The Spartans limited Ron Harper Jr. to 13 points, nine below his average, thanks to Malik Hall and Thomas Kithier’s positional defense. Jacob Young added 11, the only other Scarlet Knight in double figures. Those two went a combined 10 of 30 shooting, and MSU also had eight blocks and five steals to help offset their own giveaways.

Izzo called it “one of our better defensive performances in a couple of years.” Rutgers’ 45 points were the fewest allowed by the Spartans in a Big Ten game since a 62-44 home win over Ohio State on Feb. 17, 2019.

FRESHMAN LEADERSHIP: Why MSU may have exactly what it needs in A.J. Hoggard

“We think we can clean up some of those things offensively,” Izzo said. “And if we can keep our defense, which travels, we got a chance to take some steps forward.”

Henry scored 11 in the first half while the offense sputtered through its mistakes. Seven of his points came in an 11-4 opening salvo. He also delivered a driving dunk and his second 3-pointer as part of a 20-11 start to the second half in which he also scored seven.

“I think Aaron Henry’s played at a whole other level,” Izzo said of Henry, who had a career-high 27 points in Saturday’s win at Nebraska to help MSU snap a three-game losing streak to open Big Ten play. “You know, we’ll all marvel at his 20 points — the last two games, he’s been unbelievable defensively. And he got into some people tonight, he knocked some balls loose. It’s just his whole demeanor right now.”

They also showed vast improvement on the glass after getting outrebounded in their previous two games, almost unheard of for Izzo teams. Hauser led MSU with 14 boards for his first double-digit rebounding game in Big Ten play. The 6-9 junior had four double-doubles in MSU’s first six games.

“Really, it’s effort,” said Hauser, who scored seven of his nine points after halftime. “Rebounding is effort, the defense is effort, even a little bit of just your basketball IQ, But effort is where it starts. And making sure your guy’s not getting a rebound — cutting out is a huge part of the game. That opens up our offense a ton, too.

“But it started on defensive end. That’s why we be rebounded the ball so well.”

A lesson that’s passed through Izzo’s program from generation to generation. And one he hopes this team can continue to display.

“That was a total team win. And it was needed,” Izzo said. “It was really needed to win a game the way Michigan State wins games.”