The UConn and Tennessee women’s basketball programs have been powerhouses in the sport for years. UConn has won 11 national titles, the most in the sport. Tennessee is next with eight.

Their dominance has created an intense rivalry. The Lady Vols won three-straight against the Huskies from 2005-07, but UConn won the most recent meeting. The schools first played in 1995 and UConn leads the series 14-9, including 5-2 in NCAA tournament games and 4-0 in national title games. Today’s game will mark the 24th meeting between the two squads.

RANKINGS: Louisville is the new No.1 in the latest Power 10

Both teams have been led by highly successful coaches. The late Pat Summitt, who finished her career with a 1,098-208 record and eight national championships, coached her final game in March 2012. UConn’s Geno Auriemma has won more than 1,000 games (1099-142) and 11 NCAA tournament titles.

Auriemma is still coaching in Storrs. Kellie Harper is in her second season as head coach at Tennessee. Harper, only the third women’s basketball coach for Tennessee in the NCAA era, played point guard for Summitt from 1995-99.

Beth Maiman is a graduate of the University of Oregon with a degree in journalism. She has worked for USA TODAY, CNN Sports, MLB.com and Sports Illustrated.

The views on this page do not necessarily reflect the views of the NCAA or its member institutions. 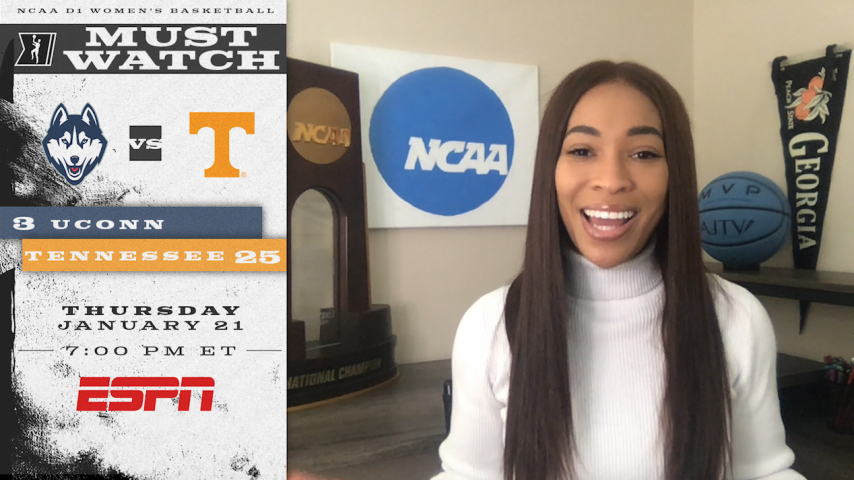 NCAA.com’s Autumn Johnson breaks down four must-watch games in Week 9 of women’s college basketball, including the renewed rivalry when No. 3 UConn takes on No. 25 Tennessee.

Every week throughout the 2020-21 season, the NCAA.com Starting Five will highlight the top women’s basketball players in the country. Here are the standouts from the past week.