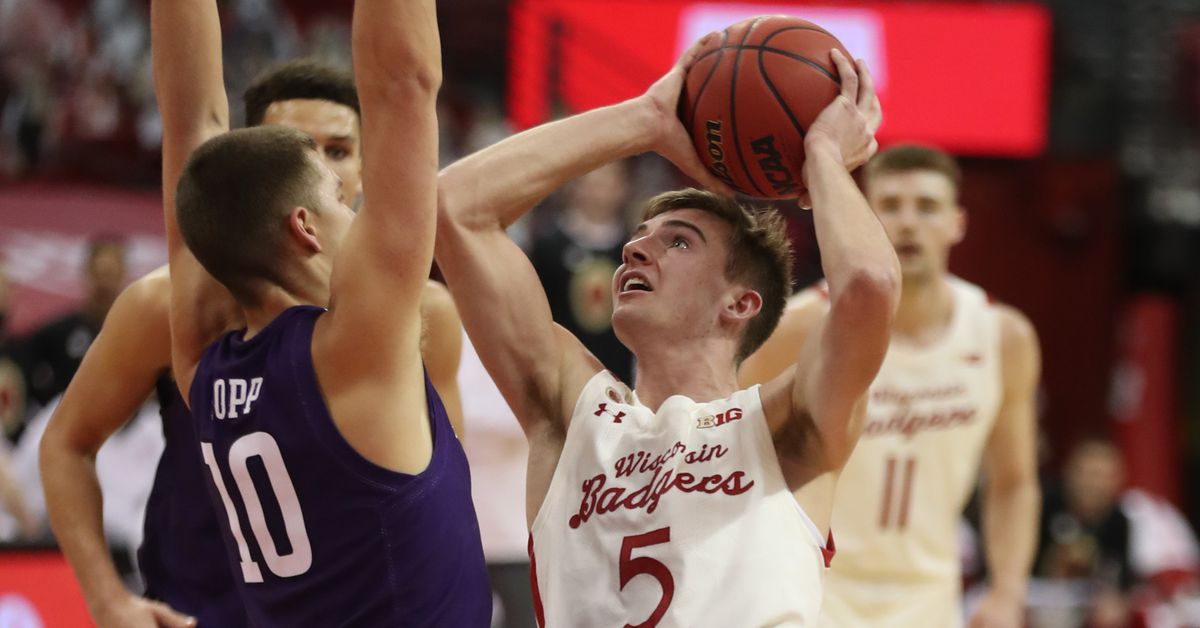 The Wildcats came into the game 6-6 overall, and under .500 in conference play, but possessing length and a balanced scoring attack to test Wisconsin at home. While Chris Collins squad represented another tough challenge for the Badgers, ultimately Wisconsin proved to be the better team all-around as they won by 16 at the Kohl Center.

Tyler Wahl led all scorers with 14 in his second consecutive start.

Sticking with the same starting lineup from the Rutgers win, the Badgers got off to a strong start behind seven quick points by Micah Potter to take a 10-6 lead into the first media timeout.

Wisconsin continued to add to their lead over the preceding seven minutes in large part due to some hot shooting from deep, and three straight buckets by freshman Jonathan Davis who was phenomenal in the first half. With six minutes remaining, the Wisconsin advantage stood at 10.

A quick run by Northwestern (6-7 overall, 3-6 Big Ten) cut the lead to only four with 3:48 left in the first half, but with two of the Wildcats top players on the bench with two fouls Wisconsin was able to extend the lead back to seven points at the intermission.

First half is in the books, UW up 41-34 over Northwestern.

The #Badgers are shooting over 50% from the field and have eight assists on 14 makes.

In the second half, Wisconsin had a patented scoring drought out of the half to allow Northwestern to close the gap to only five with 14:59 to play despite starting guard Chase Audige sitting on the bench with an early third foul.

Wisconsin was able to reassert themselves though to push the lead back to 12 at the 11:40 mark with a big three-pointer by Tyler Wahl and a nice drive plus four points by Trevor Anderson.

Greg Gard’s bunch kept the momentum going over the next eight minutes to make the lead 18 points with 3:44 remaining in the game behind some great defense and opportunistic scoring. The Badgers shifted to cruise control over the final few minutes to win 68-52 over Northwestern.

Wisconsin did a really good job of distributing the ball against Northwestern. The Badgers worked the ball inside-out and that set up some open shots from behind the three-point arc.

In the first half, the Badgers took advantage and shot 51.9% from the field and 6-of-14 from three on eight assists. As a team, Wisconsin was in rhythm offensively and that resulted in five different players scoring at least six points in the first 20 minutes.

During the second half, the Badgers were not nearly as efficient from the field, but were able to distance themselves from the Wildcats because of their effort on the defensive end.

Wisconsin finished the game shooting 44% from the field, and 37% from three with 14 assists, but the overall flow of the offense and energy level on that end of the court was solid.

After being outscored at the free throw line in the three of the previous four games, the Badgers have been able to get to the line more frequently than their opponents in the past two contests.

Against Rutgers, the Badgers were able to convert 16 of their 21 attempts from the free throw line while simultaneously holding Rutgers to only seven chances at the charity stripe.

It was more of the same against Northwestern, as Wisconsin made 7-of-8 from the line in the first half and pushed three Wildcat starters to the bench with two fouls. Those free throw makes were a big reason the Badgers lead at the half, as Northwestern actually made more shots from the field in the first stanza.

No. 3: The Tyler Wahl experience

Most assumed the switch of Tyler Wahl and Nate Reuvers in the starting lineup was primarily matchup based against Rutgers, but head coach Greg Gard ran it back against Northwestern, and it paid off.

Tyler Wahl put together a new career high with 14 points, and was an efficient 5-of-7 from the floor with two three-point makes.

Wahl’s emergence of late has helped spark the offense for the Badgers and his ability to make the little plays on both ends of the court make him a valuable starter for the Badgers. With a push in basketball for positionless play, Wahl is a modern player that can defend just about anyone in the game. His abilities on the defensive end helped him earn his starting spot, but now his confidence on the offensive end is growing as well.

Up next: The Badgers will welcome No. 15 Ohio State to the Kohl Center on Saturday afternoon. Tip-time is set for 3 p.m. CST, and the game will air on CBS.