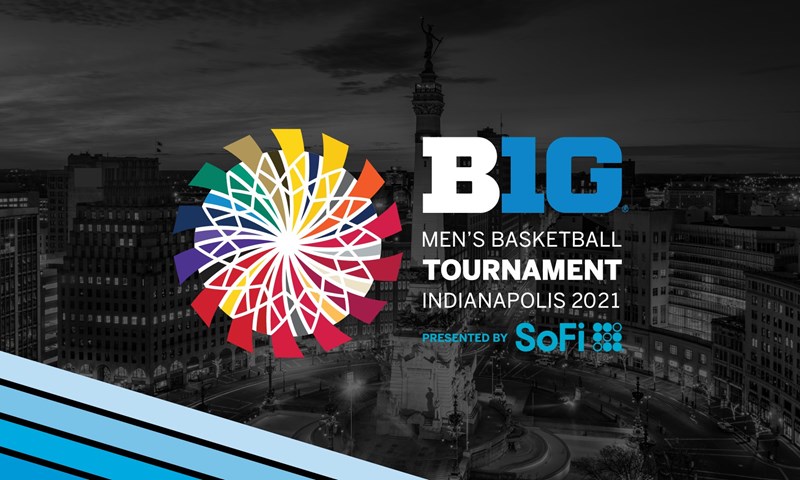 ROSEMONT, Ill. – The Big Ten Conference has released the game times and television outlets for the 2021 Big Ten Men’s Basketball Tournament presented by SoFi that will be played March 10-14 at Lucas Oil Stadium in Indianapolis. The Big Ten Network will televise the tournament’s first 10 games, with coverage spanning the first round of the tournament through the quarterfinals. CBS Sports will once again broadcast the semifinals and final to a national audience on the CBS Television Network.

The tournament is slated to tip off at 6:30 p.m. (ET) on Wednesday, March 10, followed by a second game that starts 25 minutes after the completion of the first contest. The second round of the tournament will take place on Thursday, March 11, and features four games played between two sessions, with the first session tipping off at 11:30 am (ET) and the second session beginning at 6:30 p.m. (ET).

On Friday, March 12, BTN will wrap up its coverage by broadcasting the tournament’s quarterfinal round. Like the second round, the quarterfinals will feature four games played between two sessions, with the first session beginning at 11:30 am (ET) and the second session starting at 6:30 p.m. (ET).

CBS Sports will serve as a tournament broadcast partner for the 24th consecutive year and is set to air the semifinals and final on Saturday, March 13, and Sunday, March 14.

The first semifinal will tip off at 1 p.m. (ET) on Saturday, March 13, with the second semifinal beginning 25 minutes following the conclusion of the first game.

The Big Ten Men’s Basketball Tournament championship game tips off at 3:30 p.m. (ET) on Sunday, March 14, and will be followed by CBS’ Selection Show which airs at 6 p.m. (ET).

All BTN on-air games can be streamed via the web, smartphones, tablets and connected devices through the FOX Sports App, while the CBS Sports broadcasts will also be available to stream live on Paramount+.

The 2021 Big Ten Men’s Basketball Tournament schedule is as follows:

NOTES: All times are approximate and subject to change … BTN games are also available on the FOX Sports app … CBS Sports broadcasts will also be available to stream live on Paramount+… for more information, please visit the tournament web site at bigten.org/mbbt.