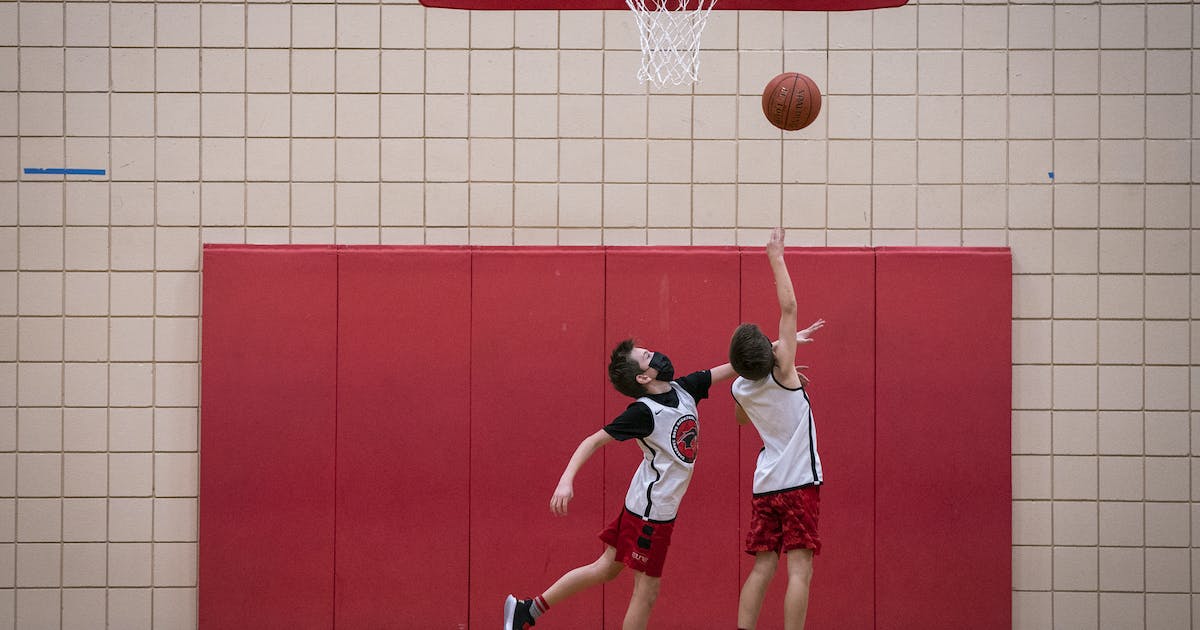 Anna Belleson and her daughter, Bryn, know the route to Forest Lake all too well.

A Champlin Park fourth-grade girls’ traveling basketball coach, Belleson has driven the 45-minute trip from her home to Forest Lake on four weekends over the past month for Bryn’s games. First they took part in Irondale’s tournament. Then it was Forest Lake’s, then Spring Lake Park’s and then Mounds View’s on Feb. 13.

All played in gyms in the same community.

Many traveling youth basketball players, parents and coaches across the metro can relate this winter, as differing city and school district responses to COVID-19 concerns have sent some scrambling to find places to play and host tournaments.

While communities such as Forest Lake and Shakopee have held tournaments in their gyms that follow state guidelines, others have not hosted at all in 2021. Bloomington was one of them until recently. In between are places such as Edina, which hold tournaments but without spectators.

Pandemic-related requirements and recommendations from the Minnesota Department of Health have prompted no shortage of adaptations to tournaments, which are the highlight of traveling basketball. The disruptions have had financial implications as well for tournaments, usually scheduled months in advance, that are a critical source of revenue for youth associations.

Not all communities are making the same adjustments.

“There are a good number of districts that are interpreting capacity limits and [health department] guidelines differently,” said Steve Krueger, president of the Shakopee boys’ basketball association. “That’s probably the biggest frustration for all the associations.”

The Shakopee school district has made tournaments possible at its facilities. Krueger said his organization alone has held two tournaments, with 170 or more teams in each, both with significant modifications owing to the pandemic.

Specific entrance and exit locations are marked. Spectators and participants must enter at specific times. Masks must be worn at all times. Everyone has to leave the building immediately after games finish while chairs, bleachers and clocks are sanitized. People can’t come inside until right before the next game.

“It’s difficult in a Minnesota winter, but it’s one of those necessities to get the kids back on the court,” said Krueger, who coaches his son Alexander’s fifth-grade A team.

In addition to allowing Shakopee tournaments, the district, like Forest Lake, has rented gym space to other programs. In Eden Prairie, only groups made up of 75% or more city residents can rent community gym space, Eden Prairie boys’ basketball association president Luke Anderson said.

As a result, the Eden Prairie boys’ basketball association had to cancel its regular tournament. The group’s tournament for the Southwest League, a rec league composed of teams from neighboring cities, had to be moved to Shakopee.

Edina did not have to move its tournaments. But in addition to the same in-tournament modifications as Shakopee, it limited spectators, as some associations have. Each team received three wristbands for non-players — typically coaches — allowed in the building.

Scott Phinney, president of the Edina basketball association, said inconsistencies in size of facilities prompted the spectator decision. Edina plays at four locations, and some — in a normal year — would have spectators sitting on the edge of the court.

The health department recommends spectators sit at least 12 feet from participants, an impossibility for many tournaments played in small gyms. In those instances, participants must be added toward capacity limits, set at 25% of a building’s capacity. The Edina tournaments took place when capacity could not exceed 150 people. An order by Gov. Tim Walz lifted the limit to 250 people effective Feb. 13.

“So we decided instead to be consistent, limit it to three per team and provide free BallerTV [livestream access],” Phinney said.

Streaming allowed for not only families to watch immediately outside the gym but also people much farther away. For example, some grandparents watched from California. Edina also established that if a player was injured, a parent would be contacted immediately and let into the building. A Twin Cities Orthopedics trainer was also positioned at all courts.

School districts such as Bloomington have adopted a more conservative approach when it comes to renting their facilities. Until this past weekend, it had not allowed tournaments at its facilities since the state allowed games to resume on Jan. 14. Bloomington tied facility usage for youth sports to rates of COVID-19 cases, similar to how schools have determined in-person, hybrid or distance learning.

“We ended up deciding, ‘Hey, let’s tie it to data and have it mirror the state guidance for school conditions,’ ” said Mike Larson, building reservations and activities manager for Bloomington’s school district. “And when the situation with the virus improves, we will be able to operate following the state guidance. When it gets worse, we won’t be contributing to that problem.”

Bloomington school district facilities held their first tournament of 2021 this past weekend, one that has previously been canceled. Another one — the Bloomington Jefferson boys’ traveling basketball tournament — was rescheduled from late January to the last weekend in February. If the association hadn’t been able to hold the tournament in Bloomington gyms, contingency plans called for using gyms in Shakopee and Burnsville. Association vice president Tom McInerney said the cost to rent them would have been four times as much.

Changing the date still has a considerable financial impact. About 80 teams are set to attend, or 40 fewer than usual, which means less money from participation fees. Associations pay $460 per team or $425 for 10 or more teams.

“It has the potential to really impact our future seasons, both in how much we will have to charge to participate and which families will be able to afford that if we have to increase costs,” McInerney said.

It’s far from ideal, but not much is perfect in a pandemic. As a parent, McInerney is trying to find positives where he can.

“I’m just excited my kids are able to participate and get out of the house to get some exercise,” McInerney said. “And maybe more importantly, to have some social interaction with their peers.”

Premier League: Players and staff will have to self-isolate for 10 DAYS when returning from Europe – Daily Mail
College basketball rankings: Alabama jumps to No. 6 in new AP Top 25 poll, Oklahoma up to No. 7 – CBS Sports