The Champions League’s ‘Swiss Model’: Why European leagues have…

UEFA has warded off the threat of a Super League, but a new plan to shake up European football may have unintended consequences for domestic leagues

As we look forward to this season’s first batch of Champions League last-16 fixtures, the European game’s major stakeholders are in talks over introducing a new format from 2024 on.

Under the ‘Swiss Model’, UEFA’s Champions League would be expanded from 32 teams to 36, but instead of being placed in groups, the participants would essentially form one massive league.

They would not all play one another, though. The qualifiers would instead be ranked from one to 36 by their UEFA club coefficients and assigned 10 games (five at home and five away) against 10 different opponents.

The top eight teams in terms of points would progress straight to the last 16. The teams ranked ninth to 24th in the league standings would square off against one another in a play-off round to determine the eight remaining participants in the last 16.

UEFA is now hoping the ‘Swiss Model’ – which has been welcomed by top clubs – will be approved before its next congress, which will fittingly take place in Montreux, Switzerland on April 20 and stave off the threat of a breakaway European Super League.

Less than two months ago, a source told Goal that the new rumours regarding the creation of a Super League for Europe’s elite were “total bullsh*t”.

“All the major clubs want,” we were told, “is a Champions League with more fixtures, more guarantees and more money.”

So the Super League speculation has led us to where we are now, on the verge of radical revamp of the Champions League led by UEFA and the biggest clubs. 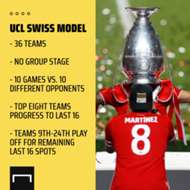 European Leagues, which represents more than 1,000 clubs from 30 countries across Europe, acknowledged that the ‘Swiss Model’ was, at least, an “an improvement compared to the more radical proposals that emerged in 2019” including UEFA’s previous plan for four groups of eight teams resulting in 14 rounds of games, some of which would have taken place at weekends.

However, European Leagues had very “strong concerns” about the fact that the new format would still mean four additional matchdays “in an already very congested calendar”.

“There’s the added pressure it will place on the calendar and its economic impact, which could seriously affect the value and competitiveness of domestic leagues and their clubs, particularly those that don’t play regularly in Europe.

“I think that every club, every league and every association in every country need to all meet to discuss and critically analyse the repercussions of this radical revamp.”

Rightly so, because those repercussions are potentially enormous.

“Everyone should now be asking themselves ‘How is this reform going to affect domestic competitions?’ because the big clubs would clearly like more streamlined domestic leagues of just 18 teams,” Kieran Maguire, author of ‘The Price of Football’, tells Goal.

“There’ll be some pushback in the Premier League on that, though. Otherwise, it’d be a case of turkeys voting for Christmas!

“In the Premier League, you need a two-thirds majority, which is 14 clubs, to make any change to the constitution, so getting 14 clubs to vote to reduce the size of the competition from 20 to 18 teams would be difficult.

“For example, why would someone like Crystal Palace, Brighton or Burnley vote for a reduction, given it increases their chances of relegation?

“So, the easy targets for freeing up four slots for midweek or weekend games in Europe are domestic cup competitions. This is a compromise that smaller clubs will probably end up accepting.” 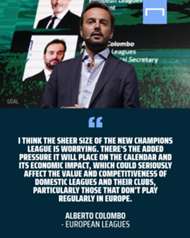 It is merely a compromise, certainly not a solution. The ‘Swiss Model’ would do little to address the massive imbalances in European football. If anything, it could exacerbate them.

As Goal has previously outlined,  European fixtures are already the biggest distortive factor in domestic leagues, and while guaranteeing Champions League qualifiers an additional four games might not sound like much, the scale of this expansion – and its potential knock-on effects – should not be underestimated.

The tournament would effectively double in size, jumping from a total of 125 games to 225, meaning UEFA would obviously then be in a position to demand even more than the €10.1 billion (£8.4bn/$12.2bn) they secured from broadcasters for the TV rights for 2021 to 2024, but what would an even bigger Champions League deal mean for domestic leagues?

Take Serie A, for example. Sky Sport Italia has secured the rights for the Champions League for a further three seasons, but it is now in danger of losing its Serie A rights to DAZN.

As the Champions League expands, both in terms of games and influence, it is entirely possible that the value of other domestic competitions will fall. That would be an extremely worrying and potentially devastating development for teams that rely heavily on money from domestic TV rights deals.

Everton, for example, have not participated in European competition since 2017-18, and more than half (53 per cent) of their income for 2019-20 came from broadcasting revenue (£98m).

Such sides would be left trailing in the wake of perennial Champions League participants if they will now be guaranteed 10 continental fixtures instead of six. The financial gap between the haves and the have-nots would only increase, making it ever more difficult for outsiders to secure a seat at Europe’s top table.

It is worth noting that the additional four places in the expanded Champions League are likely to be allocated based on UEFA’s club coefficients. It would effectively be the introduction of a safety net for super-clubs who fail to qualify because of one poor domestic campaign.

The new Champions League, then, could effectively become a Super League in everything but name.

There has long been an argument that clubs are merely giving the fans what they want: more games between Europe’s top teams.

European Club Association (ECA) chairperson Andrea Agnelli has argued that the game’s power brokers need to be innovative, pointing out that football is facing greater competition than ever before for the attention of younger fans now drifting towards Esports.

“You won’t find any match-going fans that want more European games. There might be a demand from broadcasters or markets outside of Europe for more matches, but there is no demand from the fans.

“They don’t want more games because they can’t afford more games. We’re all going through an unprecedented economic crisis and there is a limit on what a football fan can invest into football.

“So, if you add more games and higher TV subscriptions – which, let’s face it, is the idea behind it all – well, then, fans are going to say enough is enough.”

Of course, the pandemic has actually played a pivotal role in the elite’s drive for reform. Devastated by the effects of the coronavirus-caused financial crisis, the big clubs are desperately seeking more income and fewer surprises. 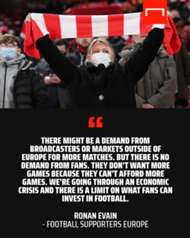 “Let’s not pretend that FFP was ever there for egalitarian reasons,” Maguire says. “It was to slam the door shut. It was there to prevent the creation of a new Chelsea, PSG or Man City, and that’s been successful. It’s achieved its aims. It’s helped maintain the status quo.

“The other elephant in the room is if we’re going to have an expanded competition, and also still have the Europa League and the Conference League, how is the money going to be distributed between those three competitions? Because the rich clubs are not interested in giving anything to the smaller ones.”

This is precisely why there are growing calls for independent regulators to curb and control spending within the game.

“We can all see that football is struggling to manage its finances,” Evain argues. “It’s hard not to ask questions when your club is paying players millions and millions in wages but is now, all of a sudden, furloughing staff or asking supporters to write off season tickets.

“These are not the super-rich businesses we were told they were. We’re realising that these are mismanaged companies with very little cash reserves. So, what we are witnessing now with the Champions League expansion is football’s attempt to deal with this crisis, internally.

“What we, as fans, were hoping for was that this difficult period would be used for a deep reflection on football, how it is run, and its relationship with local communities and society in general.

“Instead, a lot of the major stakeholders are spending a lot of money and effort rushing through a format that will do nothing to address the imbalances within the game.

“So, while there’s still hope that there will be a backlash, it’s hard to remain optimistic when the discussion is being driven by the very people and clubs responsible for the toxic culture of reckless spending that has got us to this point.” 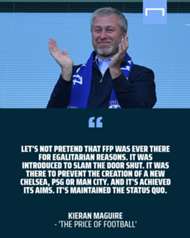 With clubs seeking some degree of certainty in such a perilous period, an expanded Champions League is the logical outcome. However, the expansion could create further issues.

UEFA is a governing body by definition. Its remit is to look after all clubs across Europe at all levels, but the way in which it is dealing with the Champions League suggests a preoccupation with protecting the interests of a few elite clubs.

By expanding the Champions League and therefore impacting domestic leagues and cup competitions, it could become a competitor to the very leagues with which it should be collaborating.

At a time when everyone should be working together, we are now set for a battle over more European fixtures and fewer domestic games.

“In England, for example, the League Cup is almost certain to go and the FA Cup will be moved to a midweek competition, which will free up some of those precious weekend slots,” Maguire argues.

“Remember, the reason why they’re so coveted is that games played at noon or 2pm on Saturdays and Sundays can be sold for more money to Asian broadcasters, as they’re primetime slots there.

“So, you’ll see domestic cups cut or shortened in England, which will keep the big Premier League clubs happy for now, as it’ll mean they’ll have space for their four extra games.

“Make no mistake about it, this won’t end here. Even if this expanded Champions League is approved, the next time the format comes up for renewal, they’ll be pushing for more, like assuming some of the broadcasting rights on an individual basis.

“This is all moving in one direction and that’s towards the concentration of power into the hands of those increasingly successful and wealthy clubs.

“In the short-term, though, the small clubs in England will probably accept changes to the cup competitions. They’ll be saying, ‘We’re not happy about it but we’ve kept our 20-team league.’ They’ll actually think they’ve won.”