Alabama Basketball “Locked Into Winning” Before Sweet-16 Matchup Against… 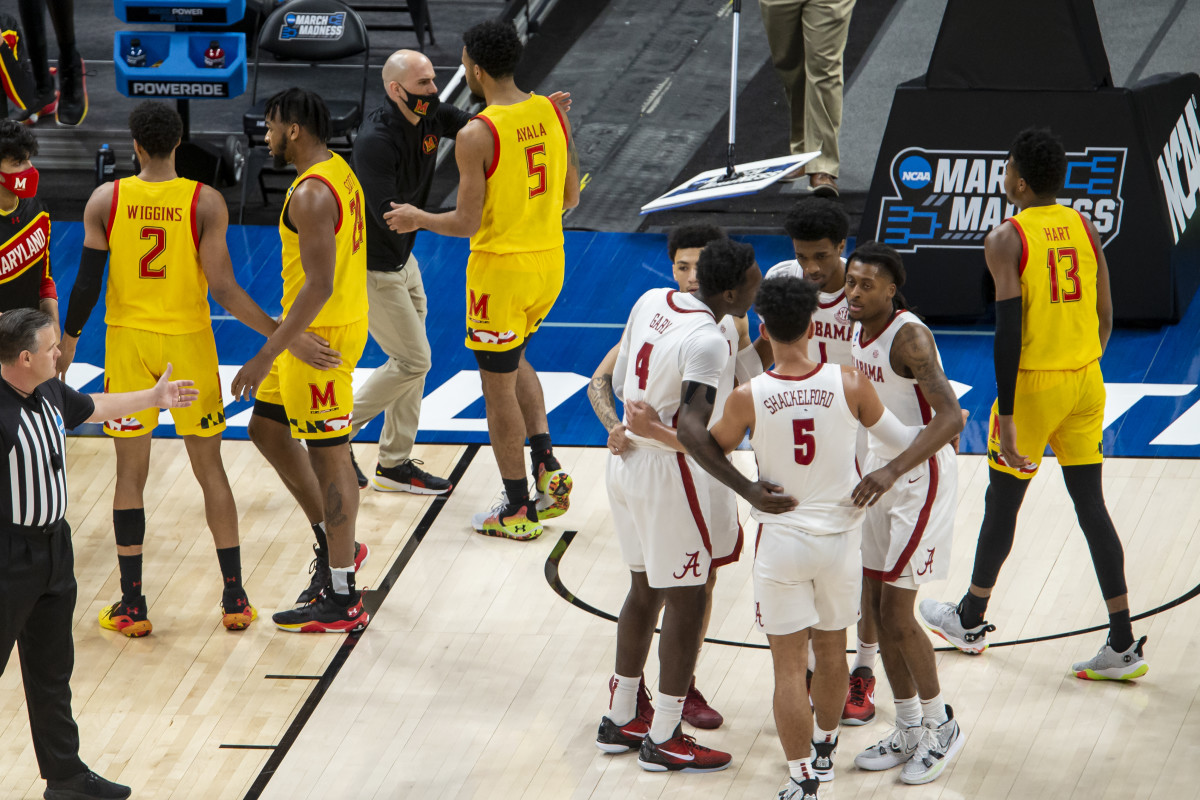 INDIANAPOLIS — The only thing standing in the way between Alabama basketball and it’s second-ever appearance in the Elite 8 is coach Mick Cronin’s “hard-nosed” UCLA squad.

Sunday evening (6:15 p.m, TBS) inside Hinkle Fieldhouse will be the second time in the careers of Cronin and Crimson Tide coach Nate Oats that the two have squared off on the hardwood. The first meeting came when Cronin was at Cincinnati and Oats was at Buffalo back in November of 2017, with the Bearcats pulling out a close one over Oats’ Bulls, 73-67.

“He’s 1-0 against me,” Oats told the media via Zoom earlier in the week. “We lost that one at Buffalo. It was a tight game. His teams are tough. They’re hard-nosed, they get after it on defense and he definitely slows the game down a lot more than we do. We’re one of the fastest teams in the country, they’re one of the slowest teams. But they really value toughness, physicality, and he’s a really good coach. They’ve won a lot of games everywhere he’s been. His teams are some of the most intense, he’s an intense coach. We’ve got better defensively this year.

“I feel like we’re a lot tougher team this year than we were last year, so I don’t feel like they’re gonna come in and punk us out, if you will, like some of his teams have tried to do at Cincinnati or even what they’ve done to some teams this year at UCLA. But I do think we’ve gotta bring a toughness to the game. If you don’t match their toughness or establish the fact that you’re a tough team, it’s gonna be a long night for you.”

Per KenPom, Alabama is 11th in the nation in adjusted tempo, while the Bruins are 337th. Cronin and company want to grind you out with their traditional lineup that includes five players listed at 6-foot-9 or taller, including forward Cody Riley who averages 10 points and five rebounds.

Unlike Maryland, who possessed a deeper and bigger backcourt, Oats will use his bigs like Alex Reese, Juwan Gary, Jordan Bruner and James Rojas more against the Bruins.

Gary has been playing his best basketball of the season, averaging six points and 5.5 rebounds in two NCAA tournament games, while Reese has shot 71.4 percent (5-of-7) from beyond-the-arc versus Iona and Maryland.

“It’s a lot more conducive to playing traditional bigs than the Maryland lineup was,” Oats said. “I think Bruner, Reese, Rojas can all play this game. They’re gonna have to play well. They can’t give up blow-bys, which we had an issue with. We’re gonna have to get back to the bigs. But it’s not like they’ve got a big that’s shooting in the 40s from three or that’s really kind of more like a 3-4. Their bigs are true fives or 4-5s. We oughta be able to play those guys more.

“Now, Juwan’s been really good. We’ve still gotta get Juwan his minutes, so whether those minutes come more at the four or the five, we’ll have to figure out kind of based on how some other guys are playing through the course of the game. But Reese is playing really well, too. Reese is 5-of-7 from three in the two games, so we’re gonna have to make sure Reese gets his minutes. And Bruner’s been great for us all year. He’s a team guy, he’s a high IQ guy.”

Juzang is averaging 22.3 points and four rebounds in the Big Dance. Jaquez has been stellar as well, pouring in 16.6 points, 6.3 rebounds and 2.3 assists since arriving in Indianapolis.

Alabama guard Jahvon Quinerly is very familiar with the Bruins point guard, Campbell, who leads UCLA in assists at 5.4 per game.

“I’ve been playing Tyger all my life,” Quinerly said. “We had some battles. There’s literally a video on YouTube from probably like 8-10 years ago, and we had some battles. I’ve been playing against Tyger all my life, I’m very familiar with him. Johnny Juzang, I just worked out with him over the summer. We have the same trainer in LA, and yeah, we worked out. We played 1-on-1, so I’m familiar with a couple of those guys. UCLA was in my final seven list when I was a senior in high school, so I’m kind of familiar with UCLA and some of their players.”

For UCLA, Cronin says the key to stopping the Crimson Tide is limiting the three-point shot in bunches and crashing the glass.

“They’re the hardest team to defend in the country, probably” Cronin said. Gonzaga does it differently, but I’d say they’re 1-2 as far as challenging to stop. They’re going to make some, but six points in a 20-25 second span, if you’re down 2, now you’re down 8, it just changes the game. The only way you’re going to keep them off a run is don’t let them hit back-to-back threes.

“The thing that really scares me is, usually a team that’s a great shooting team, they don’t rebound it great. But this Alabama team, they shoot it great but they’re so athletic they go offensive rebound as well.”

Due to the matchups, Oats could tinker with the starting lineup again like he did versus the Terrapins, going with 6-foot-6 Gary over the 6-foot-10 Bruner. However, it was Bruner’s idea to come off the bench in the second round.

Oats says that the guys on his team don’t care about minutes, but rather, what it takes to get the win.

“It’s winning time,” Oats said. “We talked about it with our guys. The Golden State Warriors won 73 games starting Harrison Barnes. They got to the Finals and they decided they needed to start [Andre] Iguodala for matchup purposes. Iguodala gets Finals MVP and Harrison Barnes was a great teammate. I think we’ve got a lot of guys that are just locked into winning right now.

“They’re trying to do whatever they can to help us win.”

suggestions in name of adjustment The Swiss Model has plenty of openings. A European Super League – Qlur.com
Texas Basketball: CBS writer hints at administration issues with the Horns – Hook’em Headlines