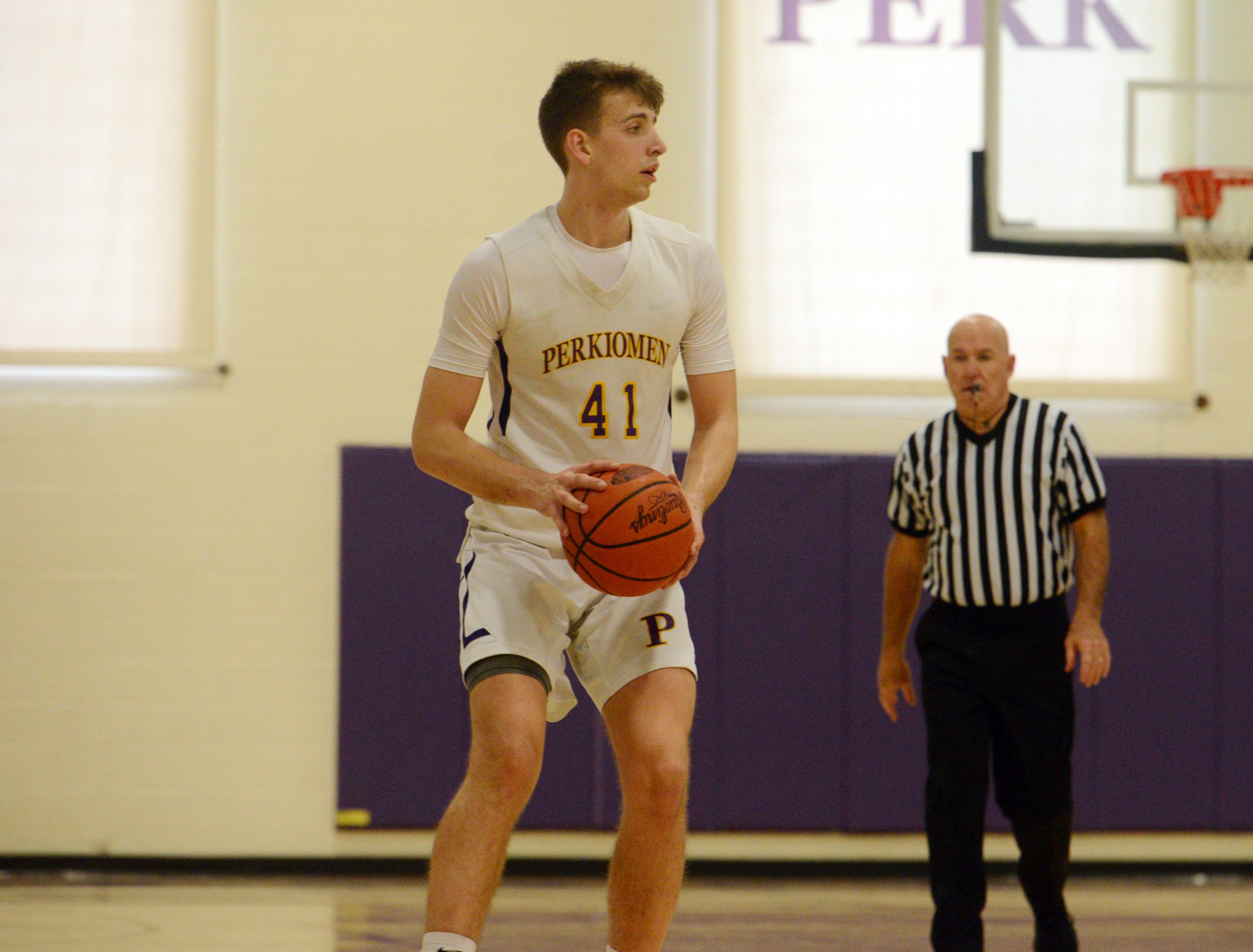 The balancing act between sports and safety protocols this winter was a challenge for schools around the Mercury Area this winter.

The task was even more daunting at the Hill School and Perkiomen School as the boarding schools had to figure out how to keep their athletes and the rest of their campuses safe around the clock.

There was no cookie cutter solution or one blueprint to follow, but in the end two of the area’s top prep programs got a chance to play some basketball this winter and kept COVID at bay while they did.

“Our school has worked extremely hard even getting us back here just so we can play under these conditions,” said Hill boys basketball player Gabe Dorsey, a Vanderbilt University recruit. “I’m really thankful to have that first off. They’ve done all the research and everything and they test twice a week and we’re staying in the dorm as a team so we get that bonding experience.

“A lot of hard work went in just to even bring us back here to play. That’s a huge blessing. We really haven’t taken it for granted as far as the hard work we put in and the dedication we were putting toward the game because we know a lot of schools didn’t get this opportunity like we had.”

Hill returned its winter athletes to campus Jan. 15 after student-athletes self-quarantined for two weeks. Boys and girls squash, boys and girls basketball and boys and girls ice hockey returned to campus for training and competed in a varied number of competitions throughout the winter depending on available opponents.

The Blues tested for COVID twice a week and had teams live in a bubble amongst themselves on campus during the school’s Hibernation Period when no other students were at Hill. Opposing schools had to have similar testing protocols and living conditions and be willing to do pre-and-post competition testing.

Perkiomen was similarly restricted by who it could schedule for games. The Panthers weren’t allowed to compete in out-of-state competition and some of their COVID precautions and testing procedures didn’t match up with typical opponents, including Hill.

“It’s been really tricky,” Perkiomen School boys basketball coach Tom Baudinet said. “It’s kind of like every school for themselves trying to figure out what’s best for you. It’s been frustrating for our guys for sure but I’m thankful for our guys we were able to get some games.”

Potential opponents for the Blues and the Panthers were limited locally. The Mid-Atlantic Prep League cancelled its season and schools in New Jersey weren’t allowed to play out-of-state competition, wiping most of Hill’s traditional foes. In-state Mercersburg Academy — a common annual opponent for both Hill and Perk — cancelled its season.

Some of Hill’s winter programs were limited to as few as one competition this winter as it was difficult to find opponents matching the necessary criteria. The boys basketball team’s season was one of the closest to resembling a typical winter schedule.

Hill started its season with an intrasquad scrimmage Jan. 23 and tipped off its first official game against The Kiski School on Jan. 29.

“You have to stay flexible. Obviously, that’s what everyone said and it really was true,” said Seth Eilberg, Hill School athletic director and boys basketball coach. “The idea that you’re going to have a mapped out posted schedule you’re going to stick to was just not realistic and in fact we really were confirming games week-to-week.”

After a long layoff Perk scheduled a contest with junior college Harcum College on Feb. 15 and added two games against George School on Feb. 24 and March 3.

In total, the Panthers played 12 games, posting an 11-1 mark. They finished an impressive 2020-21 campaign with a 3-0 showing against Westtown, Rocktop Academy and National Christian Academy in the Commonwealth Cup March 4-6.

“Just being able to find opponents that followed all those rules was probably the hardest part,” said Perk’s Phil Byriel, a Princeton University recruit. “On top of the fact that one positive test could shut everything down for two weeks or so.

“Sometimes coach B tells us that the plan is to play a game Wednesday and might not. Other teams having practices and stuff, finding gym time has been challenging. There’s been just a little bit of everything that’s been out of place this year.”

The Panthers dropped the contest against nationally ranked Harcum, but the opportunity to face off against one of the nation’s top JUCO’s was a small silver lining presented by the challenges of a season like no other.

“It was something we don’t typically get to do in a normal year,” Baudinet said. “It was unique because of COVID that we would ever do something like that but I thought the guys appreciated having the opportunity for sure.”

“They’re definitely a more physical team than the teams we played against previously,” Perk player Mitchell Fischer said. “But I feel like our team competed hard. We played hard the entire game.”

The daily life for student-athletes was also different throughout the season at the boarding schools, particularly at Hill where athletes were the only ones on campus during H-term.

Eilberg said the day-today-schedule of Hill athletes this winter mimicked the college athletic experience more closely as they spent most of their days with teammates and had lots of time to get in the weight room or gym.

“This is definitely the closet I felt compared to any of the other teams I’ve been on here at Hill just because you can attribute that to living together,” Dorsey said. “If you live with your teammates and they’re all you see everyday and you’re bonding with them, you’re bound to become close with them. It’s been a really great experience getting to know these guys and we’ve created a nice brotherhood.”

Dorsey added the closeness tended to rub off in a practice as there was an extra intensity and chippiness at times, particularly during some of the longer stretches without games.

At Perk, the intrasquad competitions similarly had an enhanced feel compared to seasons past. Baudinet said his team’s scrimmages were some of the most competitive and exciting games they played this season.

“You never know which guy is going to go off that day,” Byriel said. “Just being able to see what everyone is capable of doing and how much they’ve already progressed from the amount of individual work and time to practice this year versus playing has been awesome and the intensity has been crazy in those practices as well.”

Hill and Perk consistently have players with aspirations of playing at the next level. Eilberg estimated 10 from his squad this season could play in college some day.

The team’s did their best to film practices and scrimmages to put more film on tape of their players, but without some of their normal showcase events and fewer games exposure opportunities were limited.

Dorsey had his postgrad plans locked up prior to the season. Hill postgrad Evin Timochenko, a Wilson High School product, recently committed to Division I school Mount St. Mary’s University.

Byriel and leading scorer Honor Huff (Virginia Military Institution) were the only two Panthers committed to play at the next level before the season. Others like Fischer, who averaged 14.6 points per game for Perk, had to make the best of their situation.

“I just wanted to grow on and off the court and better prepare me for college,” Fischer said. “The coaches here at Perkiomen have been great having us schedule games and giving us opportunities to play in general and have some fun but also get in contact with some college coaches and stuff like that.”

“I feel lucky most of our kids are going to turn out OK and have options, but it’s limited what those could have been in a normal year,” Baudinet said.

In a reduced 2020-21 season there were some things accomplished like Dorsey scoring his 1,000th career point in the first game of Hill’s final series with Millbrook.

There were also some things lost — no elusive MAPL title to chase for Hill or Pennsylvania Independent Schools championship to capture for either team.

Byriel said he missed tournaments like the Hoop Hall Classic at the Basketball Hall of Fame in Springfield, Ma. and specifically mentioned Northfield Mount Hernon as an opponent he would have liked to match up with one last time.

Overall, like other athletes around the area, the sentiment from the two prep programs was a thankfulness to get back on the court safely even if things weren’t quite the same.

“Obviously there isn’t a lot of opportunity to win championships and stuff like that, but we’re really not taking this opportunity for granted,” Dorsey said. “We’re just blessed to be even playing basketball right now in this situation, these crazy times.”