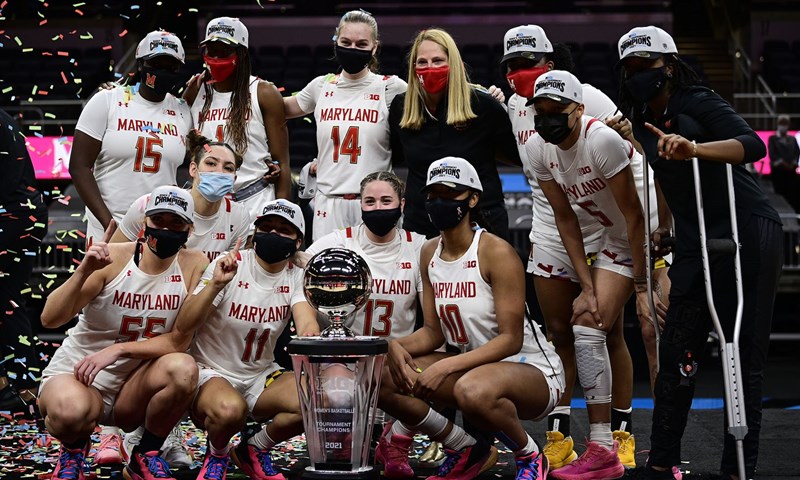 Seventh-ranked Maryland’s scoring depth and impressive skill were once again on display in a 104-84 rout of Iowa to claim a second consecutive Big Ten Tournament championship on Saturday.

How impressive? Coach Brenda Frese suggests these Terrapins (24-2) have more offensive potency and depth than her 2006 national championship squad.

“I love where this team is at right now,” Frese said. “I wouldn’t want to play us.”

There’s a reason Maryland has reached the Big Ten title game in each of the seven seasons since joining the conference, and won six of seven regular-season titles. The nation’s No. 1 offense, which entered this week averaging 93.1 points, comes at an opponent fast and is relentless.

“We just play hard as soon as we step on the court and it becomes fun,” said Most Outstanding Player Diamond Miller, who scored 15 points and had six assists. “We’re always smiling.”

The Terps have won 13 in a row, all by double digits, to earn consideration for a No. 1 seed in the NCAA Tournament.

Chloe Bibby led the Terps with 21 points, including 11 with three 3-pointers in the opening quarter. Seven of eight players who scored early had more than one basket. Each half started with top-seeded Maryland hitting a 3-pointer on the opening possession.

“I thought they were just dialed in from start to finish,” Frese said.

Then there were moments when the talent was undeniably unique. Late in the first half, Angel Reese threw a no-look, wrap-around pass inside to Faith Masonius, who finished with a reverse layup. And both of those players come off the bench.

“Our teammates have proven they are scorers just like us,” Miller said.

Maryland’s unselfish ballhandlers had a 29-19 advantage in assists. Maryland’s bench outscored Iowa’s 23-9. And the Terrapins produced more in the paint, 46-30.

Iowa (18-9) has two special players in All-Big Ten standouts Monika Czinano and Freshman of the Year Caitlin Clark, who had 22 and 21 points, respectively.

“I’m really, really proud of our team,” Czinano said. “I don’t think very many people ever thought we’d make it to a championship game.”

The sixth-seeded Hawkeyes had to win three games in as many days to play for a fourth consecutive day against one of the best teams in the country.

“I’m not disappointed with the effort this weekend,” Iowa coach Lisa Bluder said. “(Maryland is) such an offensive juggernaut.”

The Hawkeyes shot 53% from the field, but couldn’t stop Maryland’s offense, whether it was trying to defend strong drives to the rim, getting back in transition, or not extending enough on the perimeter to prevent 3-pointers. The Terps seemingly did whatever they wanted.

Maryland led 29-18 after the first quarter and 55-37 at halftime. Iowa never narrowed the gap to single digits. Maryland led 79-57 after three quarters.

“I know we’re really excited about what lies ahead,” Frese said.

“I could really see them get to the Final Four,” Bluder said of the Terrapins.