University of Cincinnati will ‘review’ allegations made against men’s…

The University of Cincinnati finally broke its silence Friday morning.

More than a week after six of its men’s basketball players entered the transfer portal in a three-day span, Cincinnati Director of Athletics John Cunningham announced via an emailed statement that UC will be reviewing allegations related to the men’s basketball team.

“The University has always put the welfare of its student-athletes first. We feel this is an essential step to ensure that all of our athletic programs meet the highest standards,” Cunningham said in the statement.

The statement did not mention any specific allegations, only that the university would be working with independent fact-finders to conduct a review.

Cincinnati men’s basketball coach John Brannen has yet to say anything publicly on the matter.

UC freshman guard Gabe Madsen, who opted out of the remainder of the season in December, was the first to enter the portal. He was followed by sophomore guard Zach Harvey, redshirt junior Mamoudou Diarra, freshman guard Mike Saunders Jr., freshman forward Tari Eason and Madsen’s twin brother, Mason.

The most notable of the group is Eason. The 6-foot-8, 215-pound four-star recruit out of Seattle averaged 7.3 points, 5.9 rebounds and 1.2 steals this season en route to earning a spot on the American Athletic Conference All-Freshman team. Eason’s 1.3 blocks per game ranked fourth in the AAC.

Saunders, the first player who Brannen offered a scholarship to when the 47-year-old coach was hired at Cincinnati in April 2019, averaged 3.5 points and 1.4 assists this season. The 6-foot Indianapolis native started 10 of UC’s last 12 games after beginning the season as a reserve.

Saunders scored a career-high 19 points on Feb. 28 against Memphis. Brannen spoke highly of the freshman after the 80-74 loss.

“Mike Saunders is the future of our program,” he said. “He’ll be one of the elite point guards here that we have at the University of Cincinnati.”

Graduate transfer Rapolas Ivanauskas, who joined the team last offseason following stints at Northwestern and Colgate, opted out in December and later joined BC Rytas, a professional club in Lithuania.

DeJulius, who also transferred to Cincinnati last offseason after two years at Michigan, spoke out in support of Brannen in a recent interview with The Athletic. That came after unnamed players offered The Athletic their unattributed takes on the second-year Cincinnati coach.

The players suggested Brannen was apathetic to the challenges they faced due to the COVID-19 pandemic, that he dispensed playing time unwisely and that they had lost all trust in him.

UC sophomore guard Jeremiah Davenport, a Cincinnati native and former Moeller High School standout, tweeted after Mason Madsen announced he was entering the portal, telling Bearcats fans to “Keep the faith … we gone be alright! REGARDLESS!”

Davenport was the only Bearcats player to earn a spot on the AAC All-Tournament team, averaging a team-high 12.7 points, six rebounds and 1.7 steals over the three-game stretch.

“I thought he was one of the most improved players in the country,” Brannen said of Davenport following the team’s 91-54 loss to second-seeded Houston in the AAC tournament championship game. “He loves Cincinnati, he loves the jersey that he puts on every day, and he plays like a young man who plays at Cincinnati. He’s hard-nosed, talented, committed, has really matured a lot in his decision making and the habits that he has.”

Brannen currently has no signed recruits. He did land his first commitment from the 2021 class in Bryson Spell, a 6-foot-9 forward out of Virginia.

Brannen is 32-21 in two seasons at Cincinnati. Brannen led the Bearcats to a 20-10 record last season, a tie for the AAC regular-season crown and the No. 1 seed in the AAC tournament. The postseason tournaments were canceled due to the coronavirus pandemic.

Cincinnati started 3-7 this season before COVID-19 issues forced the team away from the court for 25 days. The Bearcats rallied to a 9-4 finish.

UC failed to advance to the NCAA tournament for the first time since 2010. 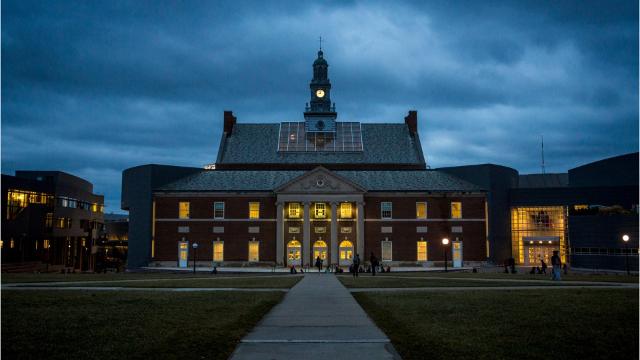 University of Cincinnati will have its largest incoming freshman class in school history, topping its total enrollment record at more than 45,000 students.