Arizona women’s basketball deserves your undivided attention as they… 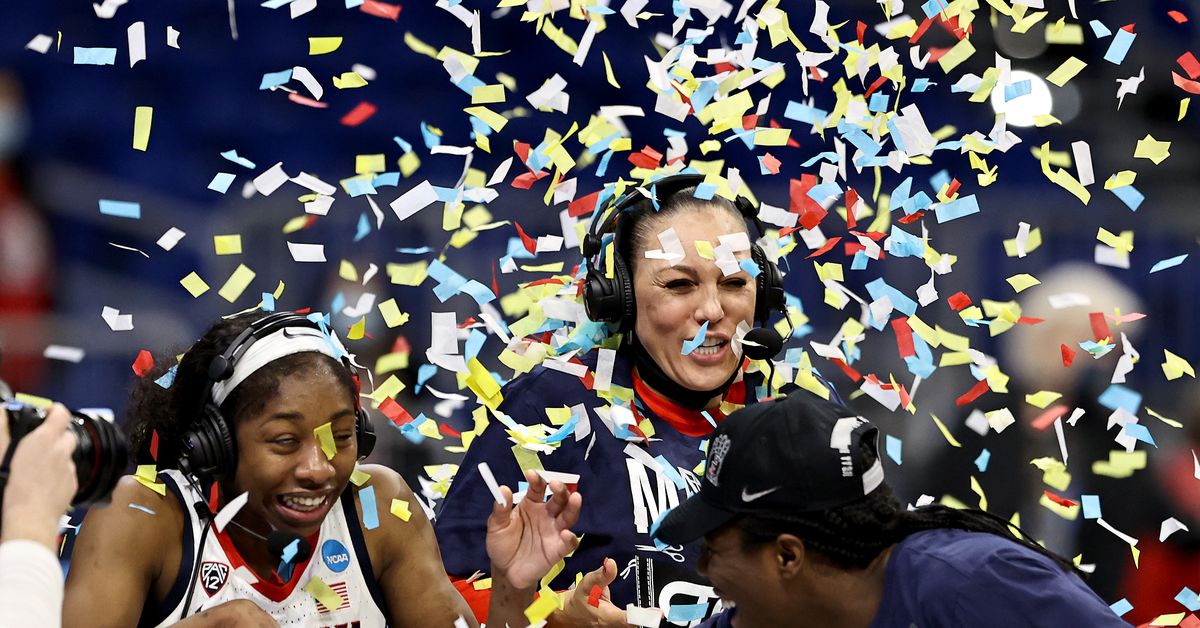 Earlier this week the Arizona Wildcats women’s basketball team made history by reaching the Final Four for the first time in program history.

The Cats did so via a convincing Elite 8 victory over Indiana, one that saw star Aari McDonald produce another incredible performance with 33 points, 11 rebounds, 4 assists and 1 steal.

Her supporting cast wasn’t bad either, and the team — led by coach Adia Barnes — set itself up for a date with a legendary UConn team for the right to go to the championship game.

Once the game was no longer in doubt, and especially soon after it officially ended, the tweets and texts started arriving. Sure, many were celebrating the historic achievement, giving credit to where it was absolutely due.

But there were others, too, that did no such thing.

No, those comments actually had nothing to do with McDonald, Barnes, Sam Thomas, Trinity Baptiste or anyone else with the program.

Instead they focused on, get this, the Arizona men’s basketball program, which is currently led by coach Sean Miller and not playing in a tournament after a self-imposed postseason ban.

We all saw them.

Most were about how Barnes guided a program to the Final Four before Miller in half the time, inferring that Miller is a failure or should be fired. Others were meant to juxtapose the two programs and show that the men’s team is in rough shape, ostensibly because the women are doing well.

That of course doesn’t make sense, but no matter.

Why be excited for what the women are doing when one could use it as a springboard to take shots at Miller and the men?

It was — and is — ridiculous. It does a disservice to the women, who deserve 100 percent of the spotlight, while showing a level of ignorance regarding the men.

Aside from their teams needing to do the same thing — put the ball in the basket — the women’s and men’s games could not be more different. But that’s not the point here, not at all.

Go ahead and have your opinions and hot takes and whatever else you want with Miller and his program. But if you’re thinking of Miller and the men while watching the women make history then you’re doing this wrong.

What does the success of the women say about the men? Not a damn thing.

This is a team whose run may be a surprise to the country but not to anyone who has followed the program of late. After winning the Women’s NIT in 2019 the Cats were primed to take a giant step forward in 2020, with a loaded roster that was ready to win.

The pandemic ended the season early and delayed the program’s inevitable return to the NCAA Tournament, but the seeds were not just planted but instead had already grown into a plant that was ready to bloom.

Would they have gone on this kind of a run last season? Would this current run have happened if last year’s tournament was played?

Those are fun questions to ask because no matter the answer, the fact remains that Arizona will be playing UConn Friday in the Final Four.

Because of that, UConn’s legendary hall of fame coach Geno Auriemma has been asked about Arizona, including McDonald.

“So Jamelle Elliott, who’s handling the scouting for us, I said, ‘Jay, what are we doing here?’’ he said. “She said, ‘I don’t know coach, we’re playing against Allen Iverson.’ So I said, ‘okay.’ I’m gonna have to call some of my old coaching buddies in the old Big East and go, ‘How do you prepare for Allen Iverson?’”

Because Arizona is taking on UConn, arguably the greatest program in the sport, the Wildcats were asked about the Huskies.

“We already know what they’re about,” McDonald said of the opponent. “Powerhouse, well-coached, skillful players. Hey, I like my chances with my teammates. Ride or die. We’re going to war with them.”

The Cats are underdogs, with the line hovering around 13 points or so to a team that has appeared in every Final Four since 2008 and has won the championship an incredible 11 times.

Arizona is a long way from being that kind of program, but in just five seasons on the job Barnes certainly has things moving in the right direction. None of what has transpired over the last couple weeks is a fluke, rather it is the result of a process that began when Barnes took over in 2016 and continued with the additions of players like McDonald, Thomas, Cate Reese and more until finally they got their chance to play on the sport’s biggest stage.

The success can only help in recruiting, and you get the feeling that even though the roster will have a different look next year the Wildcats are not going anywhere.

Now if only they could get your undivided attention.