England’s top football clubs have recorded their biggest collective pre-tax loss in the history of the Premier League because of the coronavirus pandemic.

Pre-tax losses soared to just less than £1bn in the 2019-20 season, according to the professional services firm Deloitte, almost five times higher than the previous campaign.

Clubs posted their first-ever collective fall in revenue, down 13 per cent to £4.5bn compared with the previous season, said Deloitte, which analysed teams’ latest accounts. Deloitte used estimates for Newcastle and Watford, which have yet to report their finances.

The Covid-19 pandemic forced the 20 clubs in the Premier League to defer or return revenue from broadcasters and sponsors after the season was postponed for three months from March 2020. Fans have been allowed to attend matches only since May this year.

“Our expectation at the moment is that this will be the trough of this particular dip,” said Dan Jones, a partner and head of Deloitte’s sports business group.

Clubs in the Premier League, which was launched in 1992, have only recorded pre-tax profits four times in two decades, all since 2013. On an operating level, clubs had moved towards profitability until 2018-19, the season before the pandemic, when costs grew faster than revenues. 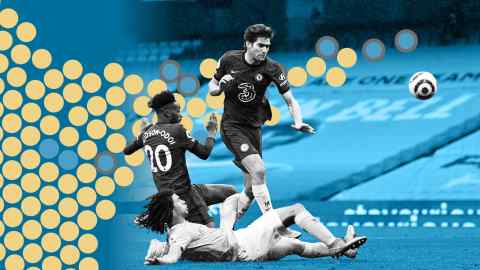 Fewer than a quarter of the clubs posted a profit. Deloitte did not provide a club-by-club breakdown, but analysis by the Financial Times showed that Manchester City, the Abu Dhabi-owned Premier League champions, recorded a loss of £125.1m in the 2019-20 season, second only to Everton, the Liverpool-based team controlled by commodity trader Farhad Moshiri, which made a loss of £139.9m.

While club finances are expected to start to recover this season, it could take until the end of next season for figures to return to pre-pandemic levels, said Jones.

The economic pressure was one of the drivers behind the European Super League, a failed attempt by 12 of Europe’s elite clubs to form a competition guaranteeing themselves entry each season to improve their finances.

The pandemic highlighted that clubs have “inflexible” costs in the short term, according to Deloitte. Despite the revenue hit, Premier League clubs increased wage spending 3 per cent to a record high of £3.3bn in 2019-20.

Yet Deloitte said it was the lowest percentage increase in wages since 2004-05, when Chelsea won the club’s first Premier League title.

Although strained club finances could put pressure on wages, Jones said that “the players who are in demand will still do very well”.

“Most people who own and make the decisions at football clubs want to win football matches and therefore they want the best players they can possibly get, and they know they’re in competition for those players,” he added.

His view was echoed by Tim Bridge, director in the firm’s sports business group, who said it was hard to assess whether low wage inflation would be lasting. He said other factors, such as deferred bonuses or temporary cuts, could skew the true picture.

Scoreboard is the Financial Times’ new must-read weekly briefing on the business of sport, where you’ll find the best analysis of financial issues affecting clubs, franchises, owners, investors and media groups across the global industry. Sign up here.

No protection for big clubs…

Balogun, Elliott, Gilmour: Who could…