‘I’d rather Man City lost in the Champions League than the Premier League’ – Why is Europe not the priority… – Goal.com

‘I’d rather Man City lost in the Champions League…

The Premier League champions will host RB Leipzig at a far-from full stadium on Wednesday, but the reasons stem further than just a hatred of UEFA

On Wednesday evening, the Etihad Stadium will be two-thirds full when Manchester City kick-off their Champions League campaign against RB Leipzig.

Three days later on Saturday, it will be close to its 65,000 capacity when they host Southampton, who sit just two points above the relegation zone, in the Premier League.

In theory, the game against Leipzig should be the more entertaining and difficult affair, even if the German outfit have made a disappointing start to the season that has seen them lose three of their four opening Bundesliga games.

After all, they only finished second to perpetual German champions Bayern Munich last season, and qualified behind Paris Saint-Germain and at the expense of Manchester United from last year’s group stage.

But it is the Champions League that City supporters generally tend to forego in the early months of the season when matches come thick and fast, despite it remaining the only piece of silverware missing from their recent successful era, and most wanted by the club hierarchy.

For fans at home watching on television, the competition is a must-see, with every match available to watch from the comfort of their armchair. For those that regularly attend City games, though, it is the one they can live without.

There will be criticism from some quarters, with the usual ‘Emptihad’ jibes likely to again fill social media timelines, but unlike many other clubs, City’s match-going supporters are drawn from a smaller, more loyal fanbase than some of their rivals, and they are still building up the number of casual fans who are happy to go to the occasional game and grateful when an opportunity arises.

Most of the crowd are season-ticket holding regulars and, in a time when pockets are being hit hard with many still recovering from the financial impact of the pandemic, it is not viable for others to attend every match.

Of the 35,000 season-ticket holders, around half are signed up for guaranteed cup tickets, with many preferring to secure their places at Premier League games.

There is also a significant number of supporters that do not yet feel comfortable returning to the stadium, with Covid-19 still affecting their desire to return to football amid concerns around public transport as well as being among a capacity crowd.

Around 2,500 season-ticket holders have been allowed to defer their place for 12 months, with the option of returning to their same seat in 2022-23, while the club is only re-selling those tickets on a match-by-match basis.

“When there isn’t a great deal of money going round, you have to be a little bit selective about the games that you’re going to be spending your money on,” Kevin Parker, secretary of the Manchester City official supporters club, tells Goal .

“I would never be critical of anybody because you never know the personal circumstances.

“City get unfortunately attacked with this ‘Emptihad’ thing, despite the fact that generally our attendances are as good as any in the Premier League. Our away support is as good as any. The support at Leicester, for instance, on Saturday was amazing. The away end was full and it was a fantastic atmosphere.”

Europe and City have never been comfortable bed-fellows anyway, with a perception among some that the Premier League champions have never been welcomed by the traditional continental giants, uncomfortable with the rise of clubs with cash-rich owners.

Fans still boo the Champions League anthem before matches, and the animosity towards UEFA was heightened when the club was banned from two years for breaking Financial Fair Play (FFP) rules in 2020 – a decision that was overturned by the Court of Arbitration for Sport (CAS) later that year.

Unhappiness with European football’s governing body goes back a long way, with a number of incidents – such as Porto fans being given a paltry fine for racially abusing City’s Mario Balotelli in 2011 or being forced to play a behind-closed-doors away match against CSKA Moscow in front of hundreds of home supports – having upset City suppporters.

That has not, though, taken away the desire to win the competition, even if the Premier League remains the main target among many fans.

“Some City fans definitely still have a feeling of animosity towards UEFA that is deep-rooted and probably won’t disappear overnight,” Parker says. “But that’s not about the Champions League competition itself, that’s about UEFA as an organisation and they are two completely different things.

“I went to Porto [for last season’s final] and of course I was disappointed we lost it. But it didn’t feel to me quite the same as losing out to the Premier League when we lost a couple seasons ago to Liverpool. 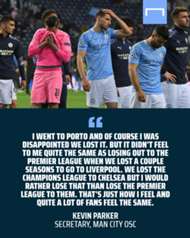 “We lost the Champions League to Chelsea, but I would rather lose that than lose the Premier League to them. That’s just how I feel about it, and I think quite a lot of fans feel the same.”

The 6,000 fans who made the trip to Portugal back in May showed that there is an excitement among the fanbase for Europe’s most-coveted trophy, and there have also been big European nights at the Etihad for pulsating knockout games against PSG, Monaco and Tottenham in previous years.

But the group stage has often been dry and unforgettable, particularly in recent seasons when Pep Guardiola’s side have qualified comfortably for the last-16 without facing any true European giants.

This year might be different, with PSG set to arrive in late November for what is comfortably the toughest Champions League group fixture City have faced since Guardiola’s side faced Barcelona in his first season in charge five years ago.

“Some people have been on furlough, some people have lost their jobs and some will have to pick and choose their games to a certain extent,” Parker concludes.

“I suppose when you’re drawn in a group where you play Club Brugge, Leipzig and PSG, you might have to think about which ticket you’re going to prioritise your money on.

“PSG is going to be an attractive fixture with [Lionel] Messi, Neymar and [Kylian] Mbappe, and then the more attractive teams come into the picture from the other groups, so I think it’s as simple as that.”

You think the European Super League is over? Think again – The Independent
The New Big 12 Should Be Just Fine in Men’s Basketball – CalBearsMaven